Announcing the Winners of the Redis Beyond Cache Hackathon

The results are in!

For the Redis Beyond Cache Hackathon, we challenged participants to build applications that use Redis modules like RedisGears, RedisAI, RediSearch, RedisGraph, RedisTimeSeries, RedisJSON and RedisBloom, as well as Redis event-driven capabilities like Redis Streams, Redis for Task Queues, and Pub/Sub. After more than 320 participants submitted 48 entries in our first online hackathon—of which 26 met our strict criteria—we held the first round of voting on DevPost, at which point five applications moved on to the final round. From June 11–18, we collected more than 2,600 votes, 640 likes, and 360 comments on our LinkedIn poll.

For the People’s Choice Award, LinkedIn votes counted for 50% of an application’s final score and judges’ voting for the other 50%. The Grand Prize went to the project with the highest overall score.

And the winners are…

The People’s Choice award was a close race—while FaceMark earned 902 votes, Redisafe was not far behind with 889. intelliSchool got 770 votes and SpecKart 48.

For the Judge’s Choice award—based on the judges’ scores alone—intelliSchool was awarded a total score of 60.6 points. Facemark earned 60, Redisafe earned 52, and Voluntree earned 49.5.

Combining the points each team earned in the two categories, the final overall standings are:

Congratulations to all the winners! intelliSchool wins $5,000 for the Grand Prize, and all the runner-ups also get a cash prize. FaceMark also takes home a $5,000 prize for winning the People’s Choice award. Plus, all the teams receive our popular Redis swag.

Priyadarshini, a masters student at Penn State University, said participating in the hackathon gave her the opportunity to explore how Redis can be used beyond caching. “With the usage of several Redis modules, we were able to convert our application into an event-driven architecture,” she says. “It helped us improve the performance of our application. Overall, the hackathon was a highly insightful and fun experience.”

Sumanth, a masters student at New York University, said this was his first venture on an event-driven application. “It was quite an inspiration to learn how Redis Streams, Pub/Sub, RedisGears, and other Redis modules can be used to achieve the performance we were expecting from our application,” he said.

FaceMark, built by Anshuman Agarwal, is a real-time video solution that can take student attendance in a classroom using contactless face recognition, so no one has to handle the same sign-in sheet. It was built with RedisAI, RedisGears, RedisTimeSeries, and Tensorflow.

Anshuman said this hackathon was his first time using Redis, and that he began the process thinking that advanced Redis features, like Redis Streams and Redis modules, would be extremely complicated. To his surprise and delight, that was not the case. “I built the first prototype of my architecture using Redis Streams and RedisGears within two to three hours of reading for the first time what they are,” he says. “I truly believe Redis has come a long way from what it’s known for, and the submissions in this hackathon are a true demonstration of the super powers Redis has.”

Built by Vi Ly, Sagar Bansal, and Moksh Nirvaan, Redisafe is an AI-based tool that checks for PPE (personal protective equipment) on medical staff to meet safety protocols to prevent the spread of infections. It uses RedisAI, Redis Streams, TensorFlow, and Express.js.

Voluntree makes it easy for nonprofits to connect with volunteers via social media platforms. It was built by Mehedi Hasan Masum, Tanvir Hasan, and Shakil Ahmed and uses Redis queues, Redis Streams, RedisGears, and RedisAI.

Rounding out the finalists is SpecKart, a blockchain-based decentralized e-commerce platform. Created by Dennis Sam and Mekha Krishnan, it uses RediSearch, Redis Pub/Sub, Redis as a cache, Socket.io, and Ethereum.

Thank you to everyone who participated, judged, and voted! We hope to host more Redis hackathons. If you’d like to share feedback on this hackathon or be the first to know about future ones, please email us at community@redis.com. 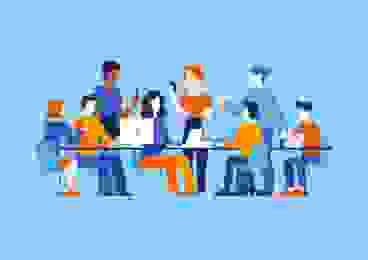 Vote for the Best App in the Redis ‘Beyond Cache’ Hackathon