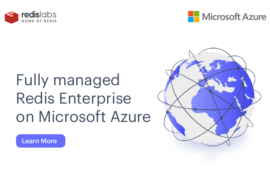 This morning, Microsoft and Redis jointly announced the general availability of Azure Cache for Redis, Enterprise tiers. The service has been in public preview since last October, and is already serving customers with production Redis workloads. The GA release is now enhanced with previews of active geo-replication (with up to 99.999% availability), and disk persistence with recovery while being rolled out to an increasing number of Azure regions.

New features in this release

Active geo-replication is available for preview

When it becomes generally available later this year, active geo-replication will provide up to 99.999% availability of service, enabling operators to bring the power of Redis to their organizations’ most mission-critical applications.

A demonstration of the active geo-replication capabilities will be available in the Azure Cache for Redis session at Microsoft Ignite.

Another preview feature now available is persistence to disk and managed recovery from persistence.

Redis persistence to disk provides durability in the rare cases where data stored in RAM is lost due to underlying compute failure of both the primary and replica Redis servers, which are deployed on separate compute nodes by default.

Head over to Azure Cache for Redis documentation to learn more about persistence.

The purchasing process is made seamless through integral billing, allowing customers to procure Enterprise-tier services as they do other Azure Cache for Redis tiers during the resource-creation process. Most importantly, for customers with a Microsoft Azure Commitment to Consume (MACC) agreement, their Redis Enterprise spend will automatically be applied to consume their Azure commitment.

Familiar Azure tools natively support database resources CRUD (Create, Read, Update, and Delete) operations. The Enterprise tiers’ entire lifecycle is manually managed through the Azure Portal or Azure CLI, and PowerShell. Automation of operations is achieved by employing the Azure Terraform provider, ARM templates, and REST API while monitoring through Azure Monitor or via the Redis datasource for Grafana.

Many Azure services are already pre-integrated with Azure Cache for Redis and with the Enterprise tiers.

Beyond cache use cases with Redis modules

The Azure Cache for Redis Enterprise tiers extend beyond the native data structures of Redis, allowing developers to do more with Redis by leveraging Redis modules. This represents a huge advantage for developers by allowing them to address more advanced use cases. The modules supported in public preview are:

This table compares the essential dimensions of each tier:

In a recent benchmark conducted the Enterprise tier (Redis on RAM) performed up to 70% more operations per second and provided up to 40% improved latency versus the Premium tier.

The benchmark compared E20 and E100 Enterprise tiers with their memory-size equivalent P3 and P5 tiers, using the memtier-benchmark tool, and the following key parameters:

The benchmark measured average latency as seen from the client including RTT (roundtrip time), and the overall maximum achievable throughput.

Note that this benchmark represents Azure Cache for Redis performance, across tiers, at scale 1x deployment. Users can expect up to Nx ops/sec improvement at each of the scale-out levels and up to 10x improvement at the current maximum scale of 10x.

Head over to the Azure Marketplace to deploy the Azure Cache for Redis, Enterprise tiers and experience these exciting new capabilities first hand. You can also visit the Azure page on Redis and share your information—a member of our team will contact you.

Learn more about the Azure Cache for Redis offering here: