Online games are rapidly becoming one of the most popular forms of entertainment. The technological boom, along with our increased usage of the internet, has made games more accessible, allowing people from all over the world to compete against each other.

Because of this geographical spread of players, games must operate with a low latency database to allow users to interact with each other in real time. Any instances where there’s a delay between the command and gaming response will create friction and hamper engagement.

Advanced programmer Tinco Andringa took this challenge on and created his own gaming platform, Topscorio. By using Redis, data is sent, processed, and retrieved in real time with exceptional consistency, creating a gaming platform that’s hyper-responsive to player commands.

Let’s take a look at how Tinco put this application together. But before we go any further, we’d like to point out that we have an exciting range of applications for you to check out on the Redis Launchpad. So make sure to give them a peek after this post!

You’ll build an app that will allow developers to create their own online multiplayer game. Topscorio optimizes the gaming experience by keeping track of high scores without having to worry about players cheating and managing big network infrastructures.

Below we’ll show you how to build this application from the bottom up, highlighting what components you’ll need along with its functionality.

Create your free Redis Enterprise Cloud account. Once you click on ‘Get Started,’ you’ll receive an email with a link to activate your account and complete the signup process.

Create an empty .env file and add the below parameters:

Fill in database addresses, passwords, and the sendgrid API key as needed.

Then in one terminal run:

Then, in another terminal, run the following command:

And navigate to http://localhost:5010 in your browser. 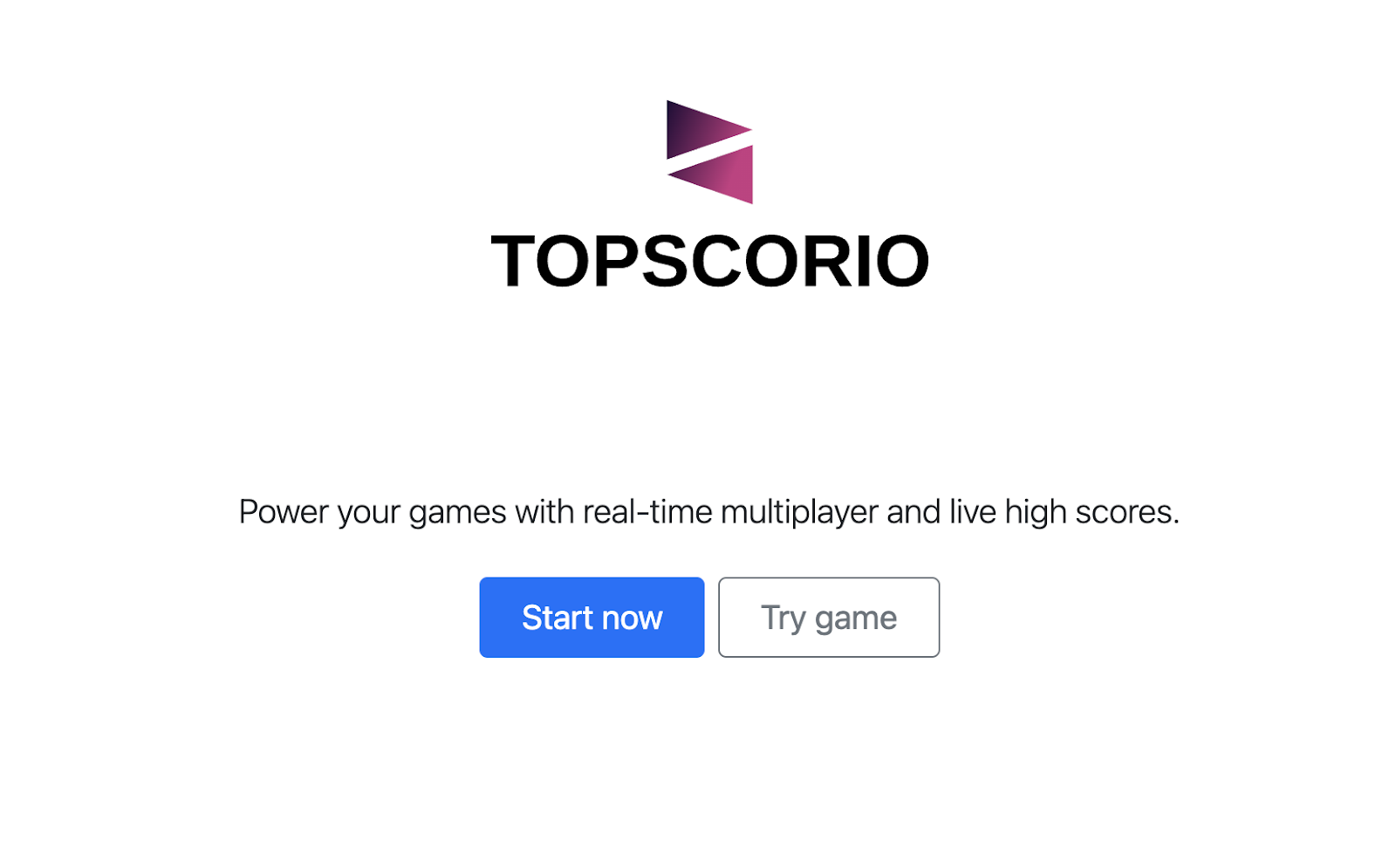 The app has an example chess game implemented, opening up multiple browser sessions to test this.

5. How data is stored

User and session storage is managed in backend/authentication_store.ts. This generates a unique session token for each session. Here’s an example:

Sessions are resumed by fetching the setting from localStorage and then retrieving the session from Redis. Here’s an example:

New authentication tokens are stored in the same way but with a shorter expiry.

Note: The email address is used as the key.

Note: This is used as the path to retrieve the whole object.

Games and game logs storage are managed in backend/games_store.ts. A cache of all games is stored in the Redis database under the following key: all-games. When the server starts up it’s first retrieved using the following command:

If it’s null, then it will populate with the below command:

Whenever a client shows interest in a channel, the server will initiate a subscription. For example, when a user joins a game with the id abc123, the server will subscribe to that game using the following command:

At the moment, the server does not UNSUBSCRIBE. When a user creates a game the server publishes a message on the newest channel, like so:

Moreover, the server carries out the following command to add the user’s game to all of the game’s newest array:

To make sure that it doesn’t overflow, the server will follow up with the following command to shorten its backup:

Once created, the games are retrieved using the following command:

7. How the application works

Both signing in and signing up share the same process. First, you need to click on the ‘Start Now’ button on the homepage. Next, you’ll be required to provide your email address for a confirmation email. Open this email in your inbox, copy the sign-up link and then paste it onto your browser.

You’ll then be taken to a new page. Click on the ‘Start Now’ button to get started.

When you log in you’ll immediately land on the ‘Create a new game’ page. At the top, enter the name of your game in the given field. You’ll then need to paste your game logic in the big empty box below.

Once you’ve done this, press ‘create game’ to proceed to the next step.

Players today expect games to be hyper-responsive in all aspects, where delays between commands are almost non-existent. Even just one lag is enough to damage the user experience and frustrate players, which will only push them towards games that can run smoothly without any hiccups.

With Redis, Tinco was able to maximize the gaming experience through its ability to provide users with real-time responses. Components within the architecture became more interconnected where data transmission became both seamless and consistent, allowing players to compete with each other online in real-time, irrespective of their location.

To get the full visual demonstration of how this application was made, watch Timo’s YouTube video here. If you enjoyed this article, you should know that this is only the tip of the iceberg when it comes to Redis’ capabilities.

All around the world, programmers are using Redis to build innovative applications that are having a profound impact on everyday life. Make sure to check out the Redis Launchpad to have access to an exciting array of applications to inspire you.

Who Built This App?

Tinco is a leading software engineer at AeroScan. Make sure to visit his GitHub page to keep up to date with all of the projects he’s involved with.