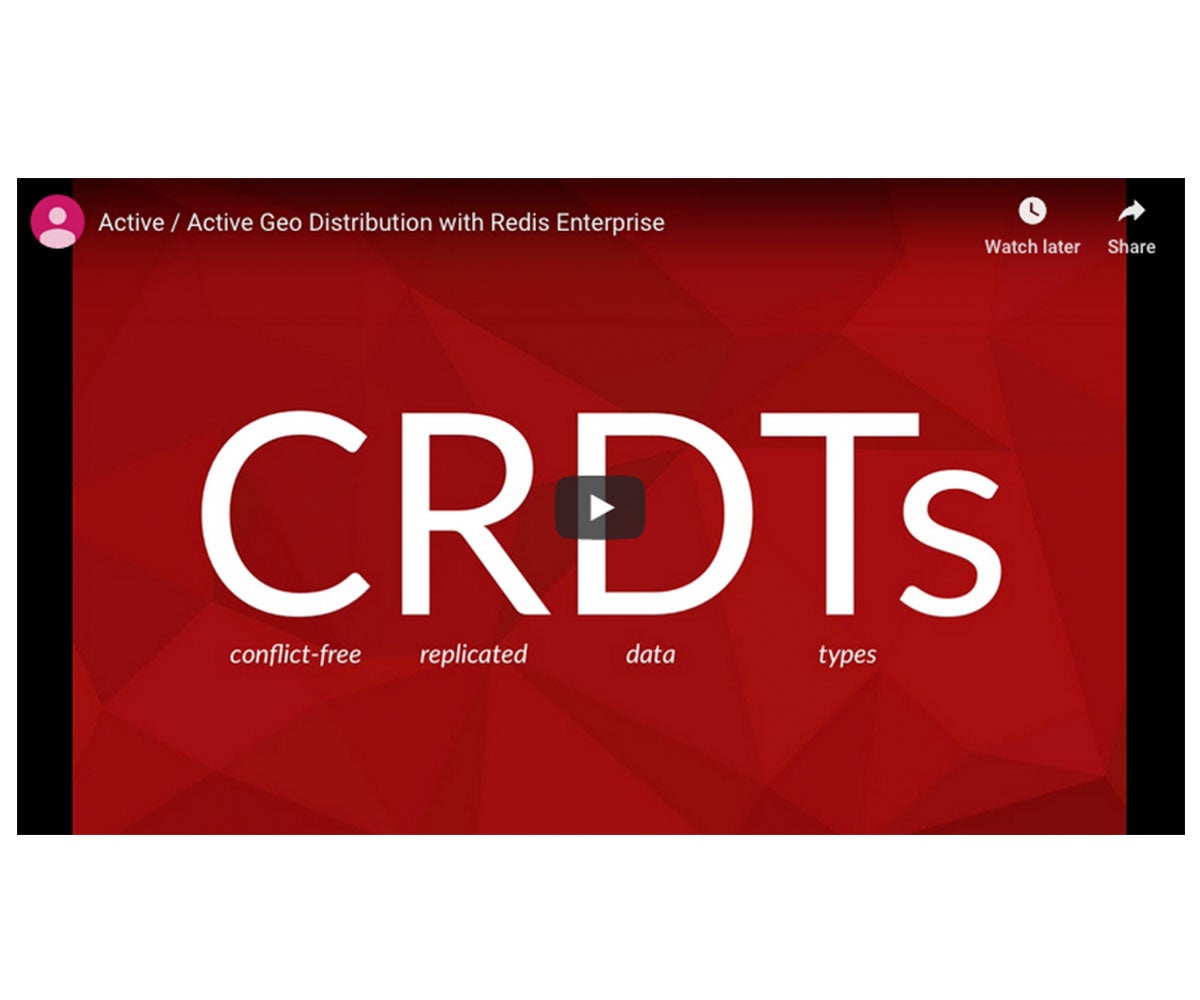 We’ve been busy working on a whole new round of videos about Redis Enterprise. Let’s take a look at the topics we’ve covered:

CRDTs (Conflict-free Replicated Data Types) are a fascinating, cutting edge way of re-merging two pieces of data that have become out-of-sync. Redis Enterprise can be deployed in an Active/Active geo distribution that uses CRDTs to resolve conflicts between pieces of data that have gone out-of-sync. In this video, we describe a scenario that causes out-of-sync data and show how Redis Enterprise resolves the conflict at the database level.

Redis is known for being an in-memory database. Memory is expensive and it is therefore often used only for precious, in-demand data. However, this scenario can be avoided using Redis on Flash. In this video, we explain how Redis on Flash extends storage into an SSD and how you can enable it on your Redis Enterprise cluster, as well as when and how much you can save by using this vs. RAM-only deployments.

Active/Passive replication is the “Swiss Army Knife” of Redis Enterprise. In the video we cover the “Replica Of” feature in Redis Enterprise and how it can be used to power replication. Then we go over the few simple steps of enabling Replica Of on the cluster. Finally, we discuss the use cases that can be covered with Active/Passive replication, including accelerating read performance, disaster recovery, geo-local databases and functional copies.

We’ve started to produce a whole series of videos aimed at a deeper understanding of Redis Enterprise. In these videos, we assume you’re up to speed with the overall architecture of Redis Enterprise and you want to know what dials to turn in order to get the best performance for your particular usage and data patterns.

In this first video of the deep dive series, we explore the options for scaling: by shard & node, by proxy, and with the Cluster API.

The next topic in the deep dive series is scaling by shards. In this video, we go over step-by-step instructions on how to add shards to an existing cluster. Then we explore why adding shards increases performance in a cluster, as well as how a running cluster using this method is able to scale without downtime.

We hope you enjoy and learn something from our videos. Please reach out to us on social media if you have a topic you’d like us to cover!