Like everyone else, we rocked a week of sleepless nights filled with networking, partying, and gambling, all in the name of AWS re:Invent 2019… but we wouldn’t have it any other way. More than 65,000 cloud professionals descend on Las Vegas the week after Thanksgiving for the cloud industry’s biggest event of the year, and we’re happy to say that this was our favorite and most successful re:Invent yet.

This year, our theme was Growth Happens: as your company and database needs grow, Redis Enterprise offers the best Redis for dealing with that growth smoothly and effectively. Read on for how we tackled re:Invent, including our greenery-filled booth, #RedisLive news crew, sumo wrestling extravaganza, and much more.

And to really feel the energy, check out this quick video of highlights from the week:

The #RedisLive news crew was all over the Las Vegas strip this year. We took our crew to the streets to ask re:Invent attendees three simple questions:

Check out their answers on Twitter, but spoiler alert… most people interpreted “cache” as something more Vegas than cloud.

We went around #reInvent and gave people shirts if they answered three simple questions. Here are the results. #RedisLive pic.twitter.com/RJr3j4sB3o

Even if you didn’t spot the #RedisLive crew, you might have seen us in the sky—our digital billboards told the Redis story in McCarran International Airport, along the freeway, and on the Strip.

Plus, we polled Twitter on attendees’ re:Invent experiences. Turns out that while most people were walking one to three miles a day, Uber and Lyft were voted the best way to get around town. But by day four, many people were feeling a bit lost.

How is everyone feeling on day 4 of #reInvent? #RedisLive

We spent our Wednesday evening at the Omnia Nightclub watching the Sumo Logic Slam Jam, a sumo wrestling event we hosted with along Sumo Logic, PagerDuty, Cloudflare, McAfee, and Hewlett Packard Enterprise.

Each company sponsored a wrestler who brawled with the others over the course of roughly 15 rounds. We could not have been more excited when, in an epic tussle in the center of the club floor, the neon lights danced and the crowd roared as Takeshi, Redis’ sponsored sumo wrestler, tossed his opponent out of the ring to win the tournament!

It was a huge upset, as Takeshi was smaller than the other wrestlers, but just as Redis database technology is lighter and faster than our competitors, his speed and agility combined for a winning strategy that allowed him to knock his last opponent off his feet and out of the ring.

Hundreds of attendees packed the room for our Thursday breakout session, Using Redis Beyond Caching. Our own Chief Product Officer Alvin Richards kicked off the session with a short recap of Redis’ 11-year history and its popularity as the most-launched, most-used, and most-loved database.

Then our customers Alliance Data and Gap shared how they are using Redis to grow their businesses. Alliance Data recently transitioned to a microservices architecture, helping to boost its uptime from 70% to 97 – 99%. And Gap shared how it uses Redis for inventory management for more than 3,100 stores and 9 distribution centers globally.

We also announced the winner of our raffle for a LEGO Millennium Falcon. Craig Bryan, who had traveled from Canada for re:Invent, became the lucky owner of the iconic starship.

If you missed it, you can watch the full session here:

An oasis in the trade-show desert

Vines, plants, and leaves covered our entire Redis booth in the Venetian. Thousands of people attended our educational sessions in our booth theater, often with standing-room-only crowds. Attendees were able to learn from our Redis experts about microservices architectures, visualizing data with RedisInsight, 10 ways to scale their websites, and more. Plus, attendees left holding our special “Growth Happens” t-shirts, while more than 180 people opted to plant a tree instead of grabbing a t-shirt, and Redis more than matched that to plant a total of 500 trees.

Look it! ⁦@croloris⁩ with a packed crowd at #reinvent talking #Redis Microservices pic.twitter.com/DNkT36QMgh

Our Redis Geeks were also available to answer any questions on Redis. Plus, we raffled off a VanMoof electric bike and electric scooters, and gave away plenty of swag, including limited-edition pins and socks. 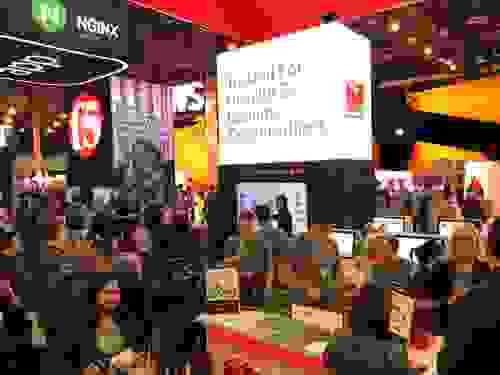 It wasn’t all Redis experts, though. The booth also welcomed Redis customers, like MGM Grand and HolidayMe, who were available to answer questions about how they used Redis to grow their businesses. Rajat Panwar, Chief Technology Officer at HolidayMe, explained that if Redis was a superhero, its strength would be in simplicity: “I’ve been using Redis for the past seven years. It was pretty simple even using it in that instance, and right now it’s still pretty simple even though the performance and features have increased.”

Redis was also in the news at AWS re:Invent:

Plus, stay tuned for a podcast HolidayMe recorded with Alvin at our booth, launching this week.

Above all, we had a blast engaging with developers and database professionals passionate about Redis and introducing people who were new to it. See you all again next year in Vegas, or in one of our upcoming events: