RedisConf18 is on the Horizon 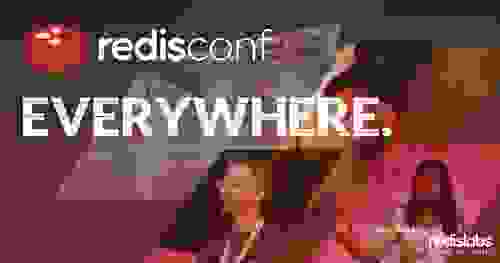 This year’s RedisConf is just a couple of months away—April 24th through the 26th in San Francisco. We’re working on putting together a fantastic program of community speakers, industry leaders, hands-on Redis training and a few fun surprises. If you haven’t registered for the conference already, stop and sign up before moving on to the next paragraph.

The conference has moved from downtown to San Francisco’s beautiful Pier 27. The new Pier 27, built in part for the America’s Cup, is right on the Embarcadero waterfront with large glass windows providing panoramic views of the San Francisco Bay, Alcatraz and the infamous Coit Tower. We’re sure you’ll love the pier and we hope it will serve as the home of RedisConf for many years to come (Insiders tip: next door is San Francisco’s beloved Pier 23 Cafe which will play host to some official and less official after hours events).

The conference starts out once again with a Day 0 training day. Our Developer Relations team recruited several of our top engineers to deliver two training tracks, Introductory and Intermediate, to help you grow as a Redis developer. If you’ve attended a prior RedisConf training or one of our Redis Enterprise Developer (RED) Workshops, you will want to register for the Intermediate track. If you have little to no prior experience with Redis, then the Introductory track is the track for you.

The next two days of the conference are packed full of keynotes, sessions and perhaps a celebrity guest or two. In addition to the founders of Redis, the keynotes this year will feature Scott McNealy (co-founder of Sun Microsystems), Joel Spolsky (CEO of StackOverflow), and Abby Kearns, the Executive Director of the Cloud Foundry Foundation. Several speakers from last year, including Jim Nelson of the Internet Archive and Daniel Hochman of Lyft are joining us again this year to share their knowledge of Redis. We also have many people speaking at their first RedisConf this year, including Gonzalo Garcia of Etermax and Jiaqi Wang of Redfin. In fact, so many great speakers submitted proposals to talk that we’ve expanded the conference to include two special purpose tracks. On Day One (April 25th), we’re putting together a Cloud Native track to help you understand how to use and deploy Redis in environments where on-premise is never an option. For Day Two (April 26th), we’ve put together a DevOps track to highlight operational issues with Redis and how Redis fits into deployment frameworks like Kubernetes.

Of course, no RedisConf would be complete without antirez, aka Salvatore Sanfilippo, the creator of Redis. This year Salvatore will be involved in all parts of the conference. During Day 0 training, Salvatore will cover the features and design choices behind  Redis Streams, the newest data type., Salvatore will also be a part of the keynote sessions on the 25th and 26th.

We’re looking forward to seeing you in San Francisco in April and if you didn’t register after the first paragraph, do it now so you don’t miss out!

PS. If you happen to be in the Tel Aviv area and can’t make it to RedisConf18 (or even if you can), be sure to get your ticket for Redis Day TLV on March 7th—before they run out! Redis Day is a full day conference in Tel Aviv that is open to the public, where Redis users can meet their peers, learn lots, and share stories.