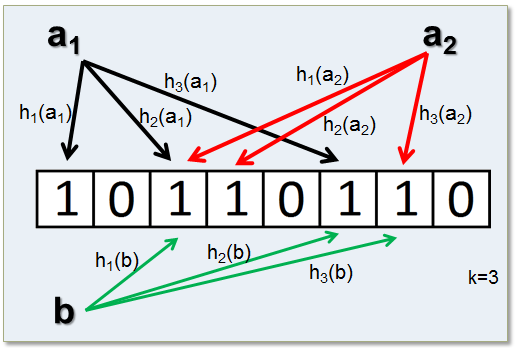 What is a Bloom Filter?

A Bloom filter is a probabilistic data structure which provides an efficient way to verify that an entry is certainly not in a set. This makes it especially ideal when trying to search for items on expensive-to-access resources (such as over a network or disk): If I have a large on-disk database and I want to know if the key foo exists in it, I can query the Bloom filter first, which will tell me with a certainty whether it potentially exists (and then the disk lookup can continue) or whether it does not exist, and in this case I can forego the expensive disk lookup and simply send a negative reply up the stack.

While it’s possible to use other data structures (such as a hash table) to perform this, Bloom filters are also especially useful in that they occupy very little space per element, typically counted in the number of bits (not bytes!). There will exist a percentage of false positives (which is controllable), but for an initial test of whether a key exists in a set, they provide excellent speed and most importantly excellent space efficiency.

Bloom filters are used in a wide variety of applications such as ad serving – making sure a user doesn’t see an ad too often; likewise in content recommendation systems – ensuring recommendations don’t appear too often, in databases – quickly checking if an entry exists in a table before accessing it on disk, and so on.

Most of the literature on Bloom filter uses highly symbolic and/or mathematical descriptions to describe it. If you’re mathematically challenged like yours truly, you might find my explanation more useful.

A Bloom filter is an array of many bits. When an element is ‘added’ to a bloom filter, the element is hashed. Then bit[hashval % nbits] is set to 1. This looks fairly similar to how buckets in a hash table are mapped. To check if an item is present or not, the hash is computed and the filter sees if the corresponding bit is set or not.

Of course, this is subject to collisions. If a collision occurs, the filter will return a false positive – indicating that the entry is indeed found (note that a bloom filter will never return a false negative, that is, claim that something does not exist when it fact it is present).

In order to reduce the risk of collisions, an entry may use more than one bit: the entry is hashed bits_per_element (bpe) times with a different seed for each iteration resulting in a different hash value, and for each hash value, the corresponding hash % nbits bit is set. To check if an entry exists, the candidate key is also hashed bpe times, and if any corresponding bit is unset, the it can be determined with certainty that the item does not exist.

The actual value of bpe is determined at the time the filter is created. Generally the more bits per element, the lower the likelihood of false positives.

In the example above, all three bits would need to be set in order for the filter to return a positive result.

Another value affecting the accuracy of a Bloom filter is its fill ratio, or how many bits in the filter are actually set. If a filter has a vast majority of bits set, the likelihood of any specific lookup returning false is decreased, and thus the possibility of the filter returning false positives is increased.

Typically Bloom filters must be created with a foreknowledge of how many entries they will contain. The bpe number needs to be fixed, and likewise the width of the bit array is also fixed.
Unlike hash tables, Bloom filters cannot be “rebalanced” because there is no way to know which entries are part of the filter (the filter can only determine whether a given entry is not present, but does not actually store the entries which are present).

In order to allow Bloom filters to ‘scale’ and be able to accommodate more elements than they’ve been designed to, they may be stacked. Once a single Bloom filter reaches capacity, a new one is created atop it. Typically the new filter will have greater capacity than the previous one in order to reduce the likelihood of needing to stack yet another filter.

In a stackable (scalable) Bloom filter, checking for membership now involves inspecting each layer for presence. Adding new items now involves checking that it does not exist beforehand, and adding it to the current filter. Hashes still only need to be computed once however.

When creating a Bloom filter – even a scalable one, it’s important to have a good idea of how many items it is expected to contain. A filter whose initial layer can only contain a small number of elements will degrade performance significantly because it will take more layers to reach a larger capacity.

Redis users have been asking for a bloom filter data type for years, and there exist plans to add it to Redis in the future; However, since Redis 4.0 supports extending redis with Modules – we decided at Redis to go ahead and add this capability to Redis right now.

Redis Modules are written in high performance C, and are able to expose their own commands and data types, as well as define how those data types get persisted. This allowed us to simply create a very powerful Bloom filter module, and have it easily added to Redis.

Getting the module and using it is very straightforward:

You should now have a rebloom.so in the rebloom directory.

Once you’ve built the filter module you, point your redis.conf or the redis command line to the module using loadmodule or –loadmodule respectively:

You can play with it a bit using redis-cli:

You can also create a custom Bloom filter. The BF.ADD command creates a new Bloom filter suitable for a small-ish number of items. This consumes less memory but may be less ideal for large filters:

Rebloom uses a modified version of libloom, with some additional enhancements:

Running the equivalent command with rebloom:

With pipelining and perhaps modifying the thread count, it would have been possible to get even nicer numbers, but a fair benchmark is an apples-to-apples comparison.

I compared bloomd’s own benchmark to an equivalent rebloom commandset. Bloomd by default uses an initial capacity of 100k and an error ratio of 1/10k, or 0.0001. Its benchmark program simply sets 1,000,000 items and then reads them. It uses fire-and-forget semantics when setting items so network latency doesn’t become a factor when sending the commands:

The equivalent with rebloom:

I let this loop for a while because unlike the bloomd benchmark which uses sequential keys, redis-bench uses random IDs. this means that there would be a greater chance for collision.

Rebloom performs at 370k/s, or about 50% faster than bloomd.

Which is about 150% faster than bloomd!

Finally, I added a BF.DEBUG command, to see exactly how the filter is being utilized:

This outputs the total number of elements as the first result, and then a list of details for each filter in the chain. As you can see, whenever a new filter is added, its capacity grows exponentially and the strictness for errors increases.

Note that this filter chain also uses a total of 5MB. This is still much more space efficient than alternative solutions, since we’re still at about 5 bytes per element, and the uppermost filter is only at about 12% utilization. Had the initial capacity been greater, more space would have been saved and lookups would have been quicker.

You can download rebloom yourself at https://github.com/RedisModules/rebloom. If you’re using Redis Enterprise, it will be bundled with version 5.0.

Let me know if you think you can make it even faster, or file a github issue if you are having problems.