Securing your data is increasingly critical as cyber attacks, security breaches and unauthorized access to data continue to escalate. Redis Enterprise provides advanced security controls to help simplify compliance with self imposed or regulatory compliance requirements such as HIPAA, FISMA, PCI, GDPR and so on.

What is Redis Enterprise?
First, for those of you who are not familiar, Redis Enterprise is a distributed NoSQL database engine that adds to the power of open-source Redis with an enhanced deployment architecture that delivers increased scalability, availability, security and lower total cost of ownership.

Redis Enterprise architecture is built to provide a great deal of control with which to meet security regulations and standards.

One essential improvement that Redis Enterprise brings is the separation of paths for administrative access and data access. This separation equips Redis Enterprise with finer grain security controls, simplifying compliance and providing applications and developers with full access to one of the databases in the cluster to read and write data without requiring cluster administration privileges that may impact other databases/applications utilizing the same cluster (and vice versa).

With Redis Enterprise, security controls can be divided up into a few main areas to set up defenses: Authentication and Authorization; Encryption for “data in motion” and “data at rest”; Forensics and Logging. However, it should be said that despite all the security controls, if one does not secure the underlying infrastructure that Redis Enterprise utilizes then it will be hard to protect against any attack. It is important to follow security best practices to ensure a “defense in depth” strategy. Let’s explore how Redis Enterprise infrastructure can be secured first. 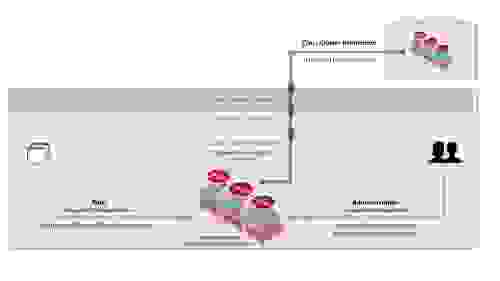 Figure: Defensive firewalls at each border between public internet and the cluster internal network create the layers of defense.

In cyber security this is known as “defense in depth” and refers to placing layers of barriers between the attacker and the target. In this case, you are placing barriers at the edge of the data center, in the perimeter network and within the cluster internal network.

Administrative Authentication and Authorization
Administrators authenticate to the UI, REST API or to the CLI using administrative accounts. Administrative identities can also be tied to central account management systems like LDAP stores. You can read more about how to configure LDAP-based accounts in Redis Enterprise here.

Redis Enterprise limits the administrative access to a set of ports that can be secured using additional OS-level mechanisms like IPTables, firewalls, etc.

Redis Enterprise provides role-based access control (RBAC). Each administrative identity in the system is also assigned to one of the built-in roles. You can find the list of available Redis Enterprise roles here.

For multi-tenant systems, each tenant can be isolated to access a subset of the databases in the system by assigning unique passwords and certificates to each database.

Source IP Filtering is another way data access can be controlled. With Redis Enterprise Cloud and Redis Enterprise VPC, administrators can limit the application server nodes that are allowed to connect to a database using IP filtering. This ensures that only application servers from a given source of IPs are eligible to authenticate to the database.

Encryption of Data in Motion
TLS/SSL-based encryption can be enabled for data in motion.

Redis Enterprise provides both alerts to track events in real time and stats to track real-time and historical trends, either rolled up to the cluster and database levels or at node and shard levels. Administrators in the system can view data up to a twelve-month window.

We just scratched the surface of the many controls that Redis Enterprise provides for securing Redis. If you’d like to get a deeper dive into security best practices, you can join the webcast here.

Looking for details on Specter & Meltdown flaws? Visit our post on the topic here.